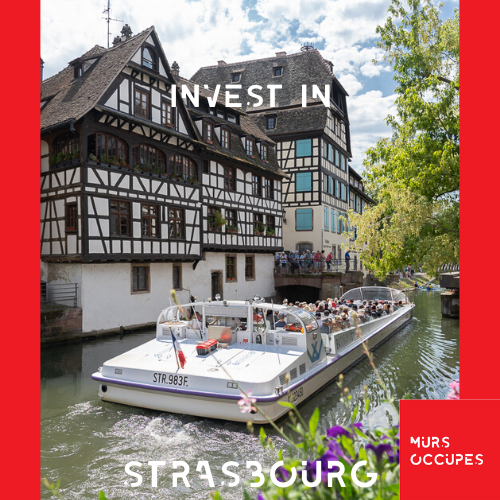 Strasbourg, the eighth most populous city in France, it has an interesting position, since it borders on Germany.
It is the capital of the Grand Est region and prefecture of the Bas-Rhin (67).
Its municipal population was 280,966 inhabitants in 2017 and is part of an urban area composed of a population of 795,839 inhabitants in 2017.
The neighboring municipalities of Strasbourg are: Bischheim, Schiltigheim, Wantzenau, Kehl, Illkirch-Graffenstaden, Eschau, Ostwald, Lingolsheim, Eckbolsheim and Oberhausbergen.

The metropolis is served by 2 highways, namely: A4 and A35.
The urban transport network of the agglomeration is made up of 6 tram lines and 37 bus lines.
The rail network connects with the TGV Strasbourg to Paris. The city is also connected to neighboring cities by a dense network.
The city also has its international airport, serving major French cities as well as the main European capitals in particular.
A fleet of self-service bicycles is available.
River traffic on the Rhine is very important, many goods are transposed there.

The agglomeration’s economy is largely based on strong sectors such as finance, trade, catering and tourism.
In addition, five competitiveness clusters have been labeled, namely:
- life sciences, biotechnologies and pharmacy
- vehicle of the future
- eco fiber materials
- Alsace Energivie: strengthening energy efficiency
- Hydreos: water and ecosystems
It includes companies such as Adidas France, Lidl France, Le Coq Sportif or even mutual credit.

Strasbourg’s commercial activity represents 30,000 jobs.
The city center is ranked the most dynamic in France. It has 18,000 m² of retail space and 12,000 jobs.
The big island and the city center bring together many shops as well as the place des halles with 120 shops and 8 restaurants.
3 shopping centers also exist: Vigie, Rivetoile and Vendenheim.

The city of Strasbourg welcomes around 56,000 students, making it a very student city with a mainly international orientation.